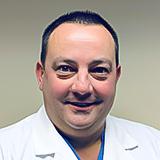 Matt Warhoover graduated Vanderbilt University with a Masters in Health Care Management. He also earned a masters in Perfusion Science from Milwaukee School of Engineering. Matt is the current Associate Chief of Perfusion at Vanderbilt University Medical Center. He is the lead for the perfusion based ECMO service line performing nearly 100 ECMO patients and 20,000 hours annually.

His career started as a Cardiac and Thoracic Surgery Anesthesia Technician in 1997 and continued his education and started his perfusion career at Midwest Heart Institute in Milwaukee, WI in 2002. In 2005 Matt moved to Perfusionist Supervisor for McAllen Perfusion Associates, Inc. in McAllen, TX and in 2016 became Associate Chief of Perfusion at Vanderbilt University Medical Center in Nashville, TN.

He is certified with the American Board of Cardiovascular Perfusion and is a Licensed Perfusionist by Tennessee State Department of Health.

He is published in the Journal of Extracorporeal Technology, June, 2008. Publication of Argatroban in Short Term Percutaneous Ventricular Assist Due to Heparin Induced Thrombocytopenia. Matt also presented to the Wisconsin Perfusion Society Meeting – September 2002 – Presentation on the inflammatory response of the utilization of pump suction during primary CABG surgery.